Take a look on my E-books page for more about my new collection of short stories for readers 9-12 and older.

Find out more about Take You With Me on my E-books page….

Take a look on my new blog page — E-books — to find out more!

April is the anniversary of two “explosive” events—one deadly, one designed to save lives – described in my recent books.

In 10 Routes That Crossed the World….

120 years ago….dreams of Klondike gold sent 40,000 stampeders to Dyea, Alaska. Their attempts to climb the snow-covered Chilkoot Trail to reach gold fields proved deadly on April 3, 1898 when “the roar of three avalanches thundering down the slope….caught, tumbled and buried dozens”, some of their bodies not recovered until summer.

In Kaboom, Explosions of All Kinds.….

60 years ago….the Canadian government decided to remove a shipping hazard in a narrow passage between mainland British Columbia and Vancouver Island that had snagged and sunk about 120 ships, and claimed at least 110 lives. Known as Ripple Rock, the pair of sharp, rock peaks lurked beneath only 3 metres of water. But it took several attempts between 1942 and 1958 before explosives planted inside the rocks finally blew off their tops. It was not until April 5, 1958 that “one of the largest planned non-nuclear explosions ever” left the peaks with 14 metres of water hiding them at low tide. Ships are now safe as they navigate this National Historic Site…but unpredictable currents still pose a challenge. 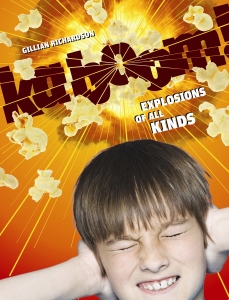 On this date in history….

These events in my recent books have anniversary dates to note in 2018.

230 years ago in Australia….the First Fleet convict ship “Lady Penrhyn dropped anchor on January 20, 1788, in Botany Bay. There would be no return from this final destination” for the 122 women and children from Britain sentenced to transport, a form of exile often for petty crimes. The transports continued until 1868, bringing settlers who are the ancestors of 20% of today’s population, which celebrates Australia Day on January 26.

154 years ago, off the South Carolina coast.…H.L.Hunley, the first submarine developed as a weapon during the US Civil War, set out to torpedo a Union warship on February 17, 1864. “After delivering its fatal blow, the Hunley disappeared….It was lost, along with the entire crew (of 8 men)…” Rediscovered in 1995 and raised from the sea, this ship showed that undersea warfare was possible, and inspired the modern submarines used for deep-sea investigation. 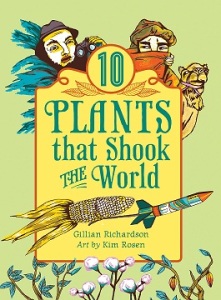 150 years ago…. brothers George and Richard Cadbury first came up with the idea to make boxed chocolates in England in 1868. Our favorite Valentine’s treat would not have been possible without cacao beans, known to Indigenous people in Central America for centuries, but later grown on plantations powered by slaves.

190 years ago.… “in 1828, a Dutchman, Coenraad Van Houten, invented a press to squeeze out most of cacao’s fat content” to create the powder we know as cocoa. Enjoy your hot chocolate drink, but remember the dark path of cacao’s history, as even today, child workers are treated unfairly in some tropical regions where it is grown.

10 Routes that Crossed the World is in the bookstores! This past Saturday, I welcomed friends and book lovers to Bookingham Palace Bookstore in the Mall at Piccadilly, in Salmon Arm. Thanks to those who stopped by—including Sarah, Mary, Vern and Barb, Diane, Josephine, Barb, Lana and Sienna, and my ‘official’ photographer, Judith. Hope you all enjoy reading about the history of those worldwide trails. 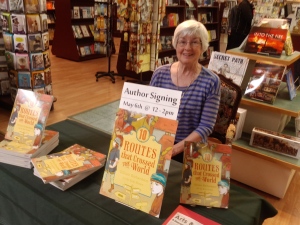 A Passion for Maps

For him, it must have begun prior to 1928 when he signed up for a 4-year term as Apprentice with The Pacific Steam Navigation Company in Liverpool, England. This began his career as a mariner that would last into the 1950s, through steady promotions to Master and numerous global voyages. For me, in 4th or 5th grade, it began as we studied the fold-up maps that came with a subscription to National Geographic Magazine. We eagerly pored over each new arrival, and in particular those of countries which my dad had visited during his years at sea.

Then, in 1958, an Atlas Folio became available to store those maps. Once each one was inserted in the appropriate place, one would have a complete world atlas of colorful maps. That atlas represents many happy evenings of entertainment for me as a child, a life-long interest in geography, and especially for maps as an intriguing way to know the world. Not necessarily a treasure now in terms of monetary value, that atlas remains a prized possession for my family.

To this day, a paper map has a special feel for me, impossible to replace with the GPS directions favored by so many travelers. As a visual learner, I need the big picture to get the whole perspective. I like to know where I am, where I’ve been, as well as where I’m going and how I’ll get there.

During the research for a couple of recent non-fiction books, 10 Ships That Rocked the World, and 10 Routes That Crossed the World, I found myself poring over maps once again.

My appreciation for the skills I learned in those early years continues to grow. I put them to work again as I traced the historical voyages of the ships, and examined the routes laid down by people embroiled in events that shaped the history of various countries and cultures. That old atlas opened a door to unlimited learning. I think my dad would have been proud of how I’ve used the knowledge.

10 Routes that Crossed the World

People have always blazed trails across the land. They’ve followed them in search of power, riches, adventure, or simply a better life. In this fourth book in the World of Tens series, you’ll read about ten routes that cross countries and continents, and span time from 20,000 years ago all the way to the 20th century: the Bering Land Bridge, Roman roads in Britain, Camino de Santiago, Inca Trail, Khyber Pass, Trans-Siberian Railroad, Chilkoot Trail, Serengeti Migration Trail, Route 66 and Ho Chi Minh Trail.

As I wrote this book, I found it fascinating to learn the history of these trails, and discover the people and events that made them memorable. The research enabled me to relive people’s experiences from long ago, try to imagine what they saw, and trace the effects of their decisions and actions. Their footprints left the stories for the curious to discover. You’ll soon be able to read them in 10 Routes That Crossed the World, to be released in April.

Rio de Janeiro — people from across the world have gathered to attend the 2016 Summer Olympic Games. Now it is the second largest city in Brazil. But 229 years ago, in 1787, it was the country’s capital, and a major port. Why is that year significant?

On August 6, 1787, the visitors who arrived in Rio could not have been more different from today’s Olympic athletes. In fact, they were prisoners…convicts in the “First Fleet” from Britain on their way to establish a penal colony at Botany Bay, Australia. Eleven 3-masted ships were the first in a program called “transportation” that continued until 1868, delivering about 165,000 convicts to Australia.

The fleet entered Rio’s harbor through a narrow entrance guarded by forts. Its commander, Governor Arthur Phillip, bought fresh provisions for his ships, and took aboard seeds that would grow in Australia: coffee, cotton, indigo (the tropical plant produced a much desired blue dye). After a month in Rio, the fleet continued on its way eventually reaching its destination on January 20, 1788.

Find out more about the voyage of the First Fleet—in particular the ship Lady Penrhyn—in my book 10 Ships That Rocked the World (Annick Press, 2015). It is part of the series, World of Tens.

A colleague, Judith Silverthorne, has also written about the transportation of convicts in a YA novel, Convictions (Coteau, 2016). The story follows 14-year-old Jennie, sentenced to 7 years in Australia for stealing a sack of oats to help feed her starving family. Loaded with tension through dramatic action scenes, this well-researched book will give you an authentic taste of life aboard an 18th-century convict ship.

Today in Ottawa, Prime Minister Justin Trudeau formally apologized for the role the Canadian government played 102 years ago in refusing entry into Canada to 376 passengers, all nonwhite British subjects, aboard the Komagata Maru. The incident revealed injustice and discrimination in Canadian immigration laws and led to eventual change, but not before the mid-1900s. In 2008, the province of BC made a formal apology, and Prime Minister Steven Harper apologized to the Sikh community at a local festival.

If you’d like to read an account of this event, check out Chapter 6 in my book, 10 Ships That Rocked the World:

“On May 21, 1914, a steamship called the Komagata Maru dropped anchor not far offshore from the city of Vancouver, British Columbia. On board were 376 South Asians, many of whom were farmers, who had traveled from India, seeking jobs and a better life in Canada. Even though the countries they traveled between were both part of the British Empire, they were met with a wall of opposition: laws had been passed by the Canadian government to keep them from entering the country. “